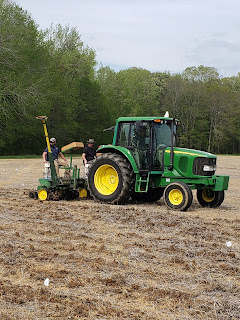 EVENTS FROM THE PAST MONTH:

May is traditionally a busy month and this one was no exception.  The bulk of our yielded trials were established, and we got many of our other trials underway also.  Weed control trials continue to go in the ground now along with some of our other later studies.  We still have quite a way to go before the “establishment” phase of the season slows down.

Trials on winter wheat should be finished in the coming month.  Spring burndown trials are complete or are getting close.  Almost all our yielded corn trials were established in April and continue to grow.  Corn growth was slowed by cool temperatures in early May but increased rapidly with the warmer weather in late May.  Our corn fungicide trials were planted in mid-May.  We traditionally plant those a little later to encourage disease development.

Our yielded cotton trials have been planted, but crop progress has been slow during the cool, wet period we had through mid-May.  Much of the Tennessee cotton crop did not get planted until late May, so we are all counting on a long fall this year.  Yielded soybean trials were planted in late May and are just now beginning to take off.

We have continued to get plenty of rainfall to this point in the season.  So far this spring, I cannot recall a single week that has not been impacted by rainfall.  The week either started off wet or we have received a shower at some point during the week.  It is never good to complain about the rain, but I wish we could save a few of these showers for July and August.  Temperatures for most of May were on the cool side.  However, we did see a warming trend at the end of May and things are feeling more seasonably warm at this point.

In early May, we did see a rare May frost that damaged some of the wheat in the area.  However, we are thankful that our plots do not appear to have been injured.

If you needed a trial on rhizoctonia, this was the year for you.  With the cool temperatures and wet soils, rhizoctonia pressure was heavy this spring.  In fact, many of the plots where we used inoculum saw plant populations dramatically reduced.  Even plots without inoculum were under substantial pressure.  This was the kind of year that reminds you why you use fungicides at planting.

The season continues to heat up as we add more trials each week.  We look forward to seeing you around the farm as your trials get ready to view.  Also, we still have room for those additional trials that come up during the season.  Just let us know what you need and we will make a plan.

The hand of the diligent shall bear rule, but the slothful shall be put to forced labor.
Posted by Tim at 6:26 AM No comments: