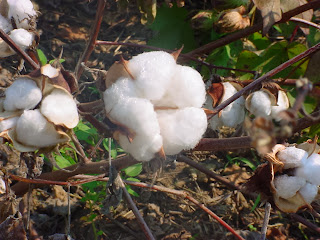 One more season is almost in the books.  With a few exceptions (such as the wheat, follow-crop, and weed control trials we have scheduled to run through the winter), all the trials are out of the field and the reports have been sent to their rightful owners.

In general, 2013 was wet, cool, and late.  Planting was delayed in many cases (we almost seem to have lost the month of May) due to frequent rains.  Much of the cotton that we did manage to plant had to be replanted (sometimes more than once).  The summer was generally mild (which was good for the corn, soybeans, and researchers), but the cotton could have used a few more heat units to push it along (particularly the later planted cotton).  Corn, soybeans, and early-planted cotton (that lived) all yielded very well.  Our biggest issues at the end of the season were getting the beans to dry down and getting the late-planted cotton open and defoliated before frost.  Quite a change from 2012 when the finished the season about a month and a half earlier.

We have put our wheat to bed for the winter and don't anticipate much activity there until early spring.  As usual, we have planted extra wheat for those fungicide trials we don't know about yet.  Let us know if you have some of those in hand.  We have also started marking out areas for early burndown trials next spring so let us know if we need to save you a nice, weedy spot.

Weed pressure this past season was dominated by resistant pigweeds (no big surprise there).  While we had plenty of moisture to activate herbicides, the frequent rains shortened the residual of our soil products substantially.  Insect pressure from some of our more consistent pests (stink bugs, plant bugs, soybean loopers) was pretty light this season.  The pests were there, but the populations did not build as I have seen them in some years.  The one big exception was thrip pressure in cotton.  We had more early thrips this past season than I can ever remember.  One new arrival this year was kudzu bug.  We had the "honor" of making the first "official" find of kudzu bugs in Shelby county this past season.  While the kudzu bug populations were pretty light this year, I am told by other researchers that we should have plenty to test on next year.  Disease pressure was fairly typical.  Both corn and soybean diseases were a bit late this year (you would think they would have come sooner with all the rain), but we had plenty of pressure in the end to get some good ratings.

Meeting season is just around the corner.  Our January calendar looks like this:

Please let us know if you plan to make any of these meetings.  I would love to have the chance to catch up with our old friends.

Allow me to take this opportunity to thank those of you that let us be a part of your research program this past season.  We were truly blessed.


Proverbs 10:4
He becometh poor that dealeth with a slack hand, but the hand of the diligent maketh rich.